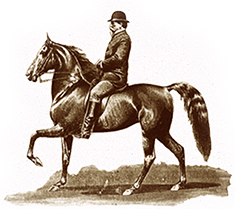 Thoroughbreds were imported to the Colonies in 1706 and crossed with the native Narragansett Pacer and by the American Revolution, an all-purpose riding horse called the “American Horse” was recognized. They retained the easy gaits and stamina of the Narragansett’s but added the Thoroughbred’s size and quality. The American Horse was so successful, an American diplomat in France wanted one as a gift for Marie Antoinette.

American Horses went west with the pioneers and in Kentucky, horsemen continued to add Thoroughbred blood to their easy-gaited horses, developing a larger, prettier, all-purpose animal known as Kentucky Saddlers.

During the Civil War, Kentucky Saddlers proved their superiority on the battlefield. Most high ranking officials on both sides rode Saddlers: Lee had his Traveller, Grant was on Cincinnati, Sherman rode Lexington and Stonewall Jackson was on Little Sorrell. Generals John Hunt Morgan and Nathan Bedford Forrest rode Kentucky Saddlers exclusively. In peacetime, the great demand for Saddle Horses enabled the industry to recover quickly. 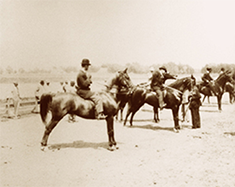 The first exhibition was recorded near Lexington, Kentucky, in 1816. The sport continued to grow and the first national horse show occurred in 1856. The Saddlers dominated the competition and rivalry at horse shows between breeders and the state pride, especially between Kentucky and Missouri, was intense. This allowed for gifted horsemen to make a living at training show horses.

In 1891 the American Saddlebred Horse Association, originally known as the National Saddle Horse Breeders Association, was founded in Louisville, Kentucky and was the first organization for an American breed of Horse.

In 1917 the Kentucky State Fair offered the first $10,000 five-gaited stake and claimed to be the World’s Championship. The American Horse Shows Association was founded the same year and through the 1920s, horse shows continued to evolve, with format and rules becoming more standardized.

Shows varied across the nation, from the high society affairs of New York and Los Angeles, to the great state fairs of the South and Midwest, to the county fairs which were more athletic contests than society functions. Agriculture was still the mainstay of America, and most Americans understood and appreciated the athleticism and splendor of the animals. Individual stars caught the public's imagination.

In the 1950s new stars emerged on the scene, including the fine harness star CHThe Lemon Drop Kid who was the only Saddlebred to grace the cover of Sports Illustrated.

The American Saddlebred Pleasure Horse Association was formed in 1957, giving stature to the English Pleasure classes which had already been a mainstay on the show circuit. Today, the pleasure divisions rival all others in numbers. 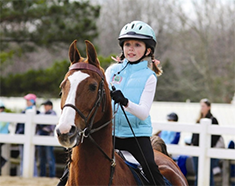 The Saddlebred world flourished in the 1970s and 1980s and the over-the-top 1980s saw the legendary rivalry of World's Grand Champions CHSky Watch and CHImperator in five gaited, and the five-year reign of CHSultan's Starina in three-gaited.

In the 1990s, focus shifted to riding programs in order to lay the groundwork for new generations of Saddlebred enthusiast. Youth has since become a large part of the Saddlebred world, with increases in Academy, ASHA Youth Clubs and new innovations such as the World Cup and ASHA Youth Driving Challenge.

Today, the American Saddlebred is a versatile horse that has found success in three day eventing, hunt seat, combined driving and in the show ring.