Mark your calendars to join us February 14-15, 2020 at the Embassy Suites in Lexington, Ky. for a fun-filled weekend of hands-on educational activities, tours, awards, and lots of fun!

The Horse of Your #ASBDreams.

Saddlebred Strong Series: A Bond Based On Freedom

A year or so ago, when her five-gaited horse, Celebration (121479G), or Gunner, as he is affectionately called, didn’t seem overly excited about his job as a show horse, she wondered what she could do to help him. Rachelle elaborates, “We worked diligently to get into the show ring and to compete in five-gaited classes. We were excelling, but our relationship wasn’t always that great. It was a rough and rocky road sometimes.” To spark something new in him, Rachelle decided to try Liberty training with Gunner. Liberty entails riding a horse with no saddle and no bridle - in other words, a complete absence of tack. Many who have tried this discipline swear by it - they say that it bonds horse and rider in an indescribable way. Liberty is often credited with creating mutual understanding, trust, and true partnership. 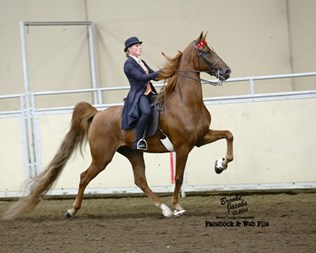 Liberty training begins on the ground. Rachelle used a rope halter to introduce Gunner to ground training, which is based upon the application of pressure and release. In this way, a horse learns to lower its head, move forward and backward, move its hind quarters and shoulders, side pass, and be lunged at all gaits. Next, Rachelle taught Gunner to neck rein and to be more responsive to leg and seat cues. This entails teaching the horse to do all gaits, halt, back, and perform circles and direction changes with decreasing bit and rein cues as training progresses, while increasing the use of seat, leg, and neck rein cues. Next, she added a liberty ring, which goes around the horse’s neck to aid the seat and leg cues if needed. Once Gunner got comfortable with these things, Rachelle took away the saddle, followed by the bridle. 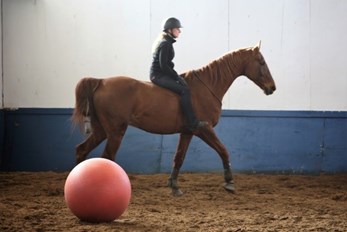 Rachelle has been amazed at the progress she and Gunner have made and the way that their mutual trust has grown since they began Liberty training, elaborating, “It's about creating assertive boundaries by being confident, consistent, and calm and having empathy for every situation. Having empathy does not mean, as a good leader to your horse, you cannot be assertive. It means you approach situations with understanding.”

She and Gunner learned a lot of these Liberty tactics on their own. However, attending clinics with Jim Anderson, founder of Higher Horsemanship and Liberty trainer extraordinaire, has helped them immensely. Hailed the ‘Horse Whisperer of Canada’, Jim was featured on PBS’s “Nature of Things” Documentary Equus Story, and Rachelle credits much of Gunner’s success to the work he has done with Jim. Liberty is spreading throughout the United States, too. In October of 2019, the first ever International Liberty Horse Association World Championship will be held at the Kentucky Horse Park. This will be a great opportunity to bring Liberty onto a more prominent stage in the states, and yet another way that the versatility of Saddlebreds can be displayed to the public. 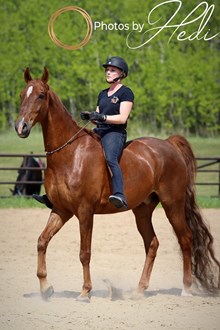 Gunner and Rachelle’s experiences, ranging from no tack to competing in a five-gaited class at a show, truly demonstrates the scope of disciplines in which a Saddlebred can excel, and furthers their already impressive resume of versatility. Rachelle sums it up as only one who loves a Saddlebred can, saying, “He can go from showing in an exhilarating five-gaited class to allowing my young daughter to show him. He has taught riders how to ride, and slow gait, and has done various demos to promote his breed. He trail rides, does obstacles, and pulls a one horse open sleigh with jingle bells at Christmas time. Most of all, he is a loyal companion that is an American Saddlebred.”

Do you have a special Saddlebred Strong story? Share it today to j.cushing@asha.net and help #SharetheSaddlebred! 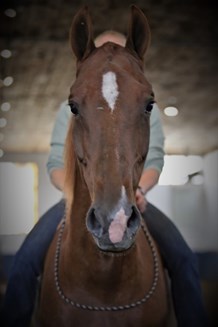