Mark your calendars to join us February 14-15, 2020 at the Embassy Suites in Lexington, Ky. for a fun-filled weekend of hands-on educational activities, tours, awards, and lots of fun!

The Horse of Your #ASBDreams.

What Matters: Arabian Horse Association Votes 29-0 to Stay with USEF 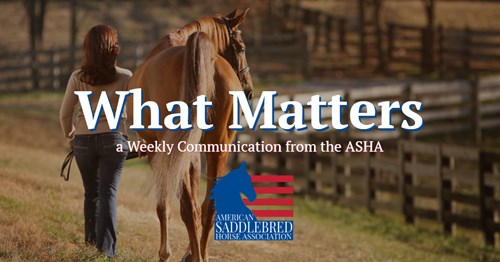 This past Monday, Aug. 12, the Arabian Horse Association (AHA) released the report of its “USEF Ad Hoc Committee.” This committee was charged at the 2018 AHA convention to “fully investigate, understand, and recommend what AHA would have to establish internally, source from others, or eliminate if the relationship with USEF was discontinued.” In other words, what would be required if the AHA were to leave the USEF, and what would it take to pull it off.

In the end, the AHA Board of Directors voted unanimously that “the AHA remain affiliated with USEF and that AHA continue to study the viability of the relationship” and that the “review of relationship will be ongoing, with an anticipated result of a stronger equestrian community for all breeds and national disciplines.”

So, why does this matter to the American Saddlebred Horse Association? The thought process of the AHA’s USEF Ad Hoc Committee gives us a peek into the financial, regulatory, training, hiring, and organizational challenges that might be faced if disassociation were to happen.  What we see is the process of a true deliberative body that took into account all of the potential considerations, big and small, that could be faced.

From a financial standpoint, they project that there could be a surplus or a loss depending on the assumptions. They look into how to staff and train officials when USEF officials are no longer available to them. They consider potential copyright infringement possibilities from a rules standpoint.  They look into how to define and track amateur and professional rules. They look into what to do when the discipline (such as dressage, hunter/jumper, and equitation) is substantially governed by USEF rules and now those rules are unavailable directly. They looked into what would happen if decisions had to be defended in court. In other words, they were very thorough and considered many angles.

They also mentioned considerations regarding Safe Sport, and as the AHA is not a National Governing Body (NGB), there “may be a cost involved” for acquiring and administering training resources. In other words, they acknowledge that disassociation from the USEF (which is a NGB) does not provide an “out” from Safe Sport legislation, just from the requirements as mandated by the USEF (which is an NGB) including reporting to the Center for Safe Sport, at least for now.

But, in the end, they refer back to the Mission Statement of the AHA and ask the question, “Would investing heavily in competition rules and processes deflect investment in other areas of equine activities to the detriment of our membership?”

Perhaps the biggest reason why it matters is one statement from the AHA concerning goals:  “to contribute to strengthening of the USEF national affiliates.” According to Glenn T. Petty, the Executive Vice President of the AHA, “It was not felt it was a small thing to get out of USEF and could be a year to 18-month process. A big thing was our affiliate meetings need to be given more time to see if the affiliate’s relationships with USEF can improve significantly.” ASHA is one of those USEF national affiliates, so they’re saying the AHA wants to work with the ASHA (and other national affiliates) to strengthen our relationship with the USEF.

That’s why this peek into the Arabian Horse Association’s thinking matters.