From the Desk of Marty Schaffel: It’s Time to Start Singing 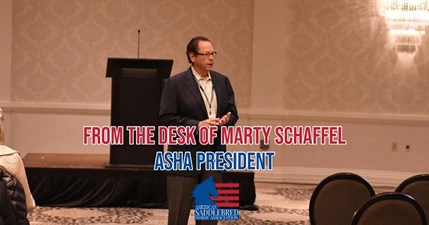 This week my message is coming from a well known, well respected and well trained survivor of living through adversity. Admiral William McRaven may have become famous for sharing the importance of “Making your bed,” but today his message is even more poignant, “It’s time to start singing.” We need to turn our backs to the wind put our heads down and prepare to weather the storm with hope, positivity and wholesome distraction.

The coronavirus has thrown us all in the mud

William H. McRaven, a retired Navy admiral, was commander of the U.S. Special Operations Command from 2011 to 2014. He oversaw the 2011 Navy SEAL raid in Pakistan that killed Osama bin Laden. This op-ed draws on a commencement address he gave at the University of Texas at Austin in 2014.

For a would-be Navy SEAL, Hell Week is the worst week of the toughest military training in the world. It is six days of no sleep, constant physical and mental harassment, and one “special day” at the Mud Flats. The Mud Flats are an area between San Diego and Tijuana, Mexico, where the water comes together and creates a swampy patch of terrain, a muddy bog that tests your determination to be a SEAL.

My training class had been out of the mud for a short period of time when the instructors, looking to weed out the weak of mind and body, ordered the entire group of 55 men back into the bog. The mud consumed each man until there was nothing visible but our heads. We were all exhausted, numb from the cold and desperate to hold on. The instructors told us that we could all leave the mud — if just five men quit. It was the instructors’ way of turning us against each other.

It was apparent that some of the trainees were about to give up. There were still eight hours to go before the sun rose — eight more hours of bone-chilling cold. Several of the students started moving to dry ground; they were ready to quit. And then, one voice began to echo through the night — one voice raised in song. The song was terribly out of tune but sung with great enthusiasm. One voice became two, and two became three, and before long the entire class was singing. The instructors threatened us with more time in the mud if we kept singing, but the singing persisted. Those of us stuck in the mud believed that if one of us could start singing when he was up to his neck in mud, then maybe the rest of us could make it through the night. And we did.

Nothing in our immediate future will be easy. The number of cases will rise. The losses will increase. The markets will stumble. But make no mistake about it, we will prevail, because the only thing more contagious than a virus is hope. We are all up to our necks in mud. It’s time to start singing.