To borrow a theme from ASHA’s Marty Schaffel and Allen Bosworth, I’m going to start this series with the question, What Matters? For those of us who participate with an American Saddlebred, whether that be in the show ring, the dressage field, or on the trails, what matters are the breeders. This dedicated minority has devoted their lives (and a lot of resources) to both preserving and improving the characteristics of the American Saddlebred horse since the pioneer days. Without them we don’t have a strong, brave, beautiful, intelligent, athletic horse that can suit our needs at the highest level in a number of endeavors with riders and drivers of many different skill sets.

Since the breeders shoulder a lot of the costs (monetary and emotional) of getting a foal on the ground and well started on the path to whatever their job will be, the American Saddlebred Registry has a longstanding program to help both reward and showcase their efforts and that is the Futurity.

By definition, a Futurity is a prize program for young horses, which awards purses made up of nomination fees paid over a period of time by participants. Futurities are held to encourage the breeding and showing of American Saddlebred horses.

Showing a foal in a Futurity enhances its value and increases its earning potential while the value of the sire and dam may also be enhanced through the success of their progeny shown in Futurities. Amateurs and juveniles, as well as professionals, have the opportunity to show young horses in Futurities.

While beauty and quality are certainly prerequisites, it takes a correct moving, athletic foal to excel in the in hand events as well as the performance offerings within the Futurity program. Some detractors have painted a picture that Futurity babies don’t make good performance horses but as you’ll see throughout the week that is all myth. Graduates of the program are crowned World’s Grand Champions, World’s Champion of Champions and World’s Champions year after year. Additionally, many exceptional breeding horses started their careers as Futurity stars.

Let’s take a look at two horses who had legendary show careers that began with Futurity prize money! 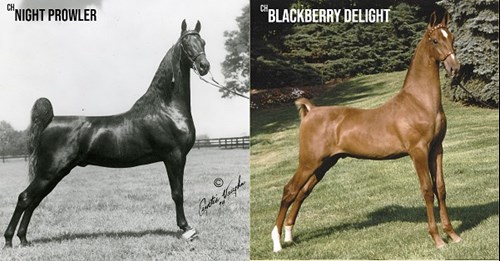 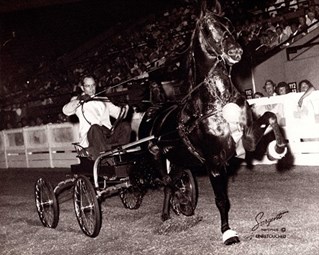 Bred by one of the strongest advocates for Futurity programs we’ve known, Jim Aikman, CH Blackberry Delight stood in the winner’s circle of the Futurity of Indiana Weanling Championship in 1993 before he embarked on a career which included 17 world’s titles in five different divisions. “Jim,” as he was affectionally known, was sired by world’s champion Blackberry Winter out of Memorable Molly who was by world’s champion Hide-A-Way’s Wild Country who was the top ranked sire of Futurity offspring for Aikman for years. 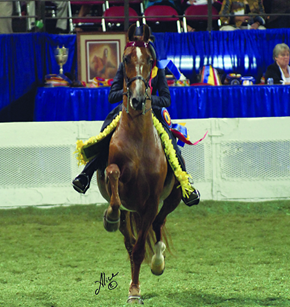 CH Blackberry Delight’s first performance world’s titles came in 1998 in the open park division under the direction of Lisa Strickland. He would go on to wear the Louisville roses in the pleasure driving, ladies three-gaited, adult show pleasure, and junior exhibitor three-gaited divisions with the likes of Alex Piemonte, Tom Pettry, Kelly Oselka, Erica Nelson, Lynda Freseth, and Rachel Machamer. Perhaps no horse in history has won as many career classes in as many different divisions with as many different riders and drivers…..and it all started on the end of a lead in a Weanling Futurity.