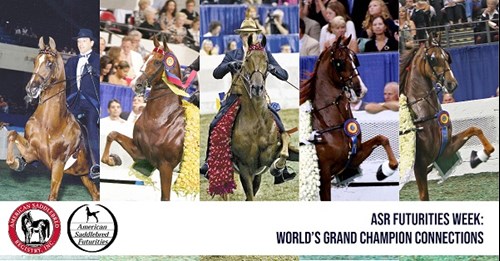 Looking back at the ASR Futurity connections, it’s most impressive the number of World’s Grand Champions that have come through the program. In the first article, we showcased the two-time Fine Harness World’s Grand Champion CH Night Prowler who had won Futurity World’s Championships as a yearling, two-year-old, and three-year-old.

Just the records from 1999 through 2019 show another seven horses that were part of the ASR Futurity program went on to wear the roses on Saturday night in Freedom Hall. The first of that group was CH An Heir About Her (BHF). Bred by Joan Lurie, the daughter of Supreme Heir, himself a graduate of the National Three-Year-Old Futurity, and Sweet Illusion W.F. (BHF) had an incredible show career, which began by matching a longtime record as a three-year-old. Owned then by Steve and Ellen Hanes, the beautiful mare won the Three-Year-Old Three-Gaited National Futurity and $12,483 before coming back on Saturday night and taking the World’s Grand Champion Three-Gaited honors with Chris Reiser again in the irons. No three-year-old had won the walk-trot stake since Forest Song and Garland Bradshaw back in 1966. 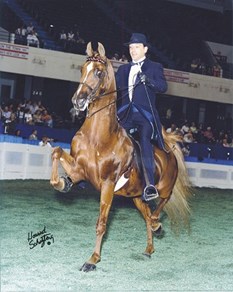 Reiser and the grand mare would win the next two World’s Grand Championships before she was sold to the Rowland family where she would go on to win a number of world’s and reserve world’s championships, including the 2010 World’s Champion of Champions Junior Exhibitor Three-Gaited 14-17 honors with granddaughter Marjorie Townsend and the 2011 world’s champion 13 & under and Reserve World’s Champion of Champions Junior Exhibitor Three-Gaited 13 & Under title with another granddaughter, Alice Rowland.

And if that long, star-studded show career wasn’t enough, CH An Heir About Her became a Hall of Fame broodmare, producing the likes of world’s titleholders, CH Pola Negri, Undulata’s Heir Apparent, Undulata’s Hullaballoo, and St. Nick EGF, among others.

Bred by the late George Knight, CH He’s The Man was crowned the 2006 Five-Gaited World’s Grand Champion with Smith Lilly showing for the Jimmie Shires family. Impeccably bred, CH He’s The Man was sired by world’s grand champion CH Man On The Town who won the 1987 World’s Champion National Three-Year-Old Five-Gaited Futurity and a little over $14,000 before going on to be the Junior Five-Gaited World’s Champion of Champions the next year and the world’s grand champion the two years after that, all with George Knight. CH He’s The Man’s dam was the Broodmare Hall of Fame matron, Perfect (Supreme Sultan x The Rose). 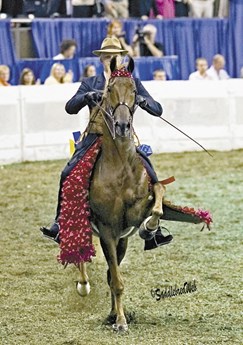 The late Bit Hutcheson’s Happy Valley Stables is the breeder of record for two-time Three-Gaited World’s Grand Champion CH Grande Gil. The son of I’m The Prince, another graduate of the Futurity of Kentucky, is out of the General Steel daughter, Steel Hearted Woman. CH Grande Gil was in the ribbons of the Kentucky Futurity as a yearling and was reserve world’s champion in the 2005 National Three-Year-Old Three-Gaited Futurity with Neil Visser showing for Joan Hamilton. 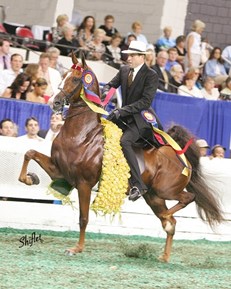 Another world’s grand champion owned by Misdee Wrigley Miller, CH Castledream was the 2003 Kentucky Amateur Yearling Futurity World’s Champion with his owner/breeder Kenny Wheeler showing. Tim and Marty Shea purchased the promising son of Castle Bravo and the great producer A Daydream Believer (BHF) and then resold him to the Greer family’s Pinekrest Farm in time for the 2005 National Three-Year-Old Fine Harness Futurity where he captured the world’s champion title with Todd Graham at the whip. For his Futurity wins as a yearling and three-year-old, CH Castledream won nearly $20,000 in prize money. Misdee Wrigley Miller then purchased him the first of 2006. 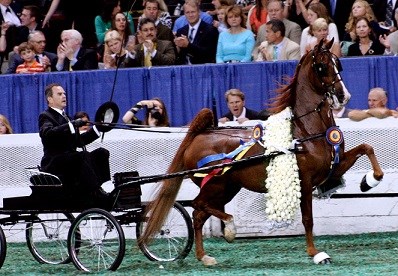 The second of the Futurity graduates to win world’s grand champion titles for the Lilly family’s Mercer Springs Farm, CH Mother Mary was bred by William Shatner’s Belle Reve Farm. She was sired by world’s champion of champions Revival who began his show ring career as the Reserve World’s Champion Futurity of Kentucky Weanling in 1991, earning $5,224 for his efforts. CH Mother Mary’s dam was Mother Superior, a daughter of Chief Of Greystone. CH Mother Mary actually began her show ring career in the Bluegrass Futurity, being shown by Jim Aikman as a weanling and Melissa Moore as a yearling. She won nearly $5,000 for her ribbons in those two Futurity classes before winning another $6,900 as the Kentucky Amateur Futurity Two-Year-Old In Hand World World’s Champion, $2,200 as the ASHA Two-Year-Old Three-Gaited Sweepstakes winner, and $4,500 as the Bluegrass Futurity Two-Year-Old Fine Harness Breeders Stake winner. To say the ASR prize money programs were very good to CH Mother Mary would be a huge understatement. She would come back as a three-year-old to take the highest honors as the World’s Champion National Three-Year-Old Park Pleasure Futurity entry, taking home another $13,409 for Smith Lilly and then owner Platinum Stock Farm. 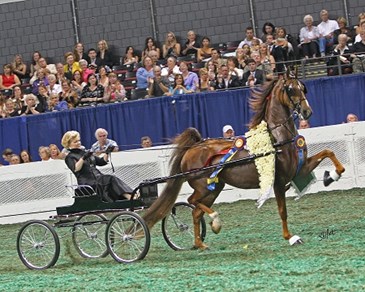 Another history making world’s grand champion had his start in Futurity events. Before becoming only the second stallion in history to win the World’s Grand Champion Three-Gaited title, Sir Silver Knight won the Futurity of Indiana Weanling class, ribboned in the Kentucky Futurity Weanling class and was reserve world’s champion with Brian Chappell in the 2009 National Three-Year-Old Three-Gaited Futurity, winning more than $13,000 for those three trips. 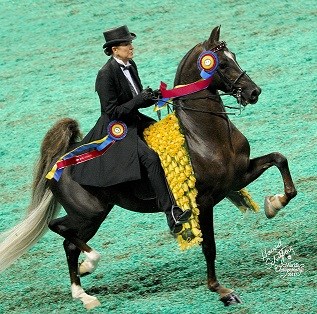 Bred by Dena Lopez, Sir Silver Knight is sired by fellow Futurity standout, world’s champion Sir William Robert out of R.R. Silver Lady who won the National Three-Year-Old Three-Gaited Futurity World’s Championship in 1995 with Lopez. She started out the year before with Top 3 in the Futurity of Kentucky Two-Year-Old Fine Harness event, winning over $14,000 for those two events.

Purchased by Annika Bruggeworth in 2012, Melinda Moore took over the training and guided the beautiful stallion to the 2013 World’s Grand Champion Three-Gaited title. The only other stallion in history to win that title was CH Valley View Supreme with Tom Moore back in 1956. Interestingly, CH Valley View Supreme is found on both sides of Sir Silver Knight’s pedigree.

The great stallion continued to be shown by Annika Bruggeworth before a near fatal trailer accident ended his show career. As a sire he has already produced such stars as Sir Lancelot’s Legacy, Bruggeworth’s current fine harness champion.

The latest world’s grand champion to have participated in the Futurity program is none other than CH Don O’Neil. Bred by Fox Grape Farms and originally named Schadenfreude, this liver chestnut gelding is by the many times number one sire of world’s champions, Undulata’s Nutcracker out of World’s Grand Champion Five-Gaited CH Garland’s Dream (BHF). In his first year of showing, CH Don O’Neil was third in the National Three-Year-Old Park Futurity with Tiffany Wheeler in the irons. In one of the most unique changes of division, he went to the country pleasure division for a while before being purchased by Cindy Chesler. 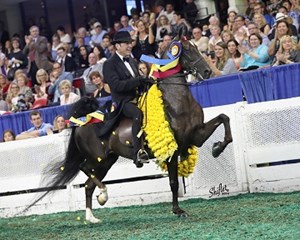 With a light, airy way of going he found his way to the three-gaited division with Chris Reiser riding for Chesler. Their first year together, they won the under-two stake at Louisville before finishing the week as the Three-Gaited Reserve World’s Grand Champions. Reserve world’s grand champions again the next year, they came back in 2016 with a world of presence and ability to capture World’s Champion Three-Gaited 15.2 & Under and World’s Grand Champion Three-Gaited honors.

Over and over again, the graduates of the ASR Futurity programs have proven themselves to be outstanding performers, and in the case of these five, at the highest levels possible. It’s also interesting to note how many of these stars are sired by horses who were also Futurity graduates. More on that storyline to come.