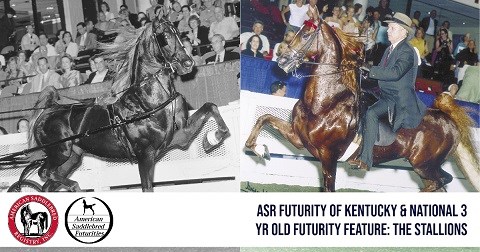 In the last article we took a look at seven modern day world’s grand champions that came through the Futurity program and noted that most of their sires had shown in Futurity events, which prompted us to take a closer look at today’s breeding stock that started out as Futurity participants.

One of the best that comes to mind is Sir William Robert, consistently one of the top ranked sires over the past decade. Tom Galbreath of Castle Hills Farm fame is the owner/breeder of this two-time world’s champion and prolific sire. He is sired by world’s champion of champions Santana’s Charm who ribboned in Futurity of Kentucky events as a yearling and two-year-old before taking on the National Three-Year-Old Five-Gaited Futurity contenders and ribboning there as well. The dam of Sir William Robert is Rebel Empress, a daughter of CH Heir To Champagne who was the 1989 National Three-Year-Old Five-Gaited Futurity World’s Champion and winner of $12,450 in that class. 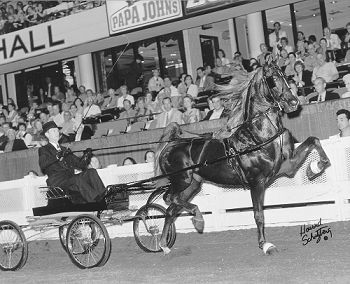 In Sir William Robert’s second career class he won the 2001 Kentucky Futurity Two-Year-Old Fine Harness World’s Championship and collected a check for $12,123. A year later he won another $12,608 as the National Thee-Year-Old Fine Harness Futurity World’s Champion, again with Steve Joyce on the lines. It is however, in the breeding shed that Sir William Robert has had his greatest accomplishments with a small sampling to include World’s Grand Champion Three-Gaited Sir Silver Knight and world’s champions of champions CH HS Baby Steps, CH Let’s Talk, CH With Style And Grace, CH HS Dignitary, CH The Mighty Mouse, HS Decorum, Sir Surreal, and Sir Graham Cracker, to go with a long list of world’s and reserve world’s champions.

With probably the most unique National Futurity World’s Champion title ever, I’m First is also proving to be a sire of champions. Owned and bred by Stonecroft Farm, I’m First is sired by the many times number one sire of world’s champions, CF First Night Out who was sired by Futurity standout and twice World’s Grand Champion Fine Harness CH Night Prowler. The dam of I’m First is That Special Face, herself the winner of the National Amateur Three-Year-Old Five-Gaited Futurity in 1993.

After winning the World’s Champion Two-Year-Old Five-Gaited title with Steve Wheeler in 2002, I’m First returned to Freedom Hall in 2003 and again as Nelson Green’s assistant trainer Wheeler was set to show the stallion in the National Three-Year-Old Five-Gaited Futurity. In the warm up ring that night Wheeler was kicked in the leg by another entry and while he did come through the gate aboard I’m First, he pulled into the middle of the ring for a time out and was unable to continue his ride. Dressed in work jods, a polo shirt and ball cap, Nelson Green climbed aboard (actually it took two attempts as the crowd went crazy and spooked the stallion) to finish the class and be crowned world’s champion. That was a $12,000 ride. 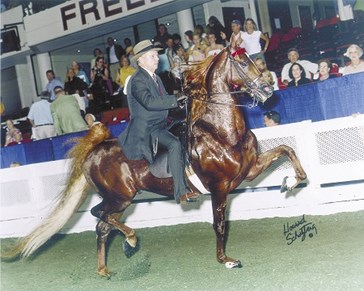 The list of stallions who came through the Futurity ranks and have made an impact today would also include the likes of A Rare Temper, My Royale Charm, A Superb Manhattan, Bob Bobaloo, Rose Arbor Destiny, Simbara’s Living Legend, Our Axel Rose, At Night, Simbara’s Rio Bravo, Sir Silver Knight, and Glamorous Nuts, among others.

Breeding does tell and it tells even more when highlighted as part of the Futurity programs, many times with former Futurity participants on both sides of pedigrees.