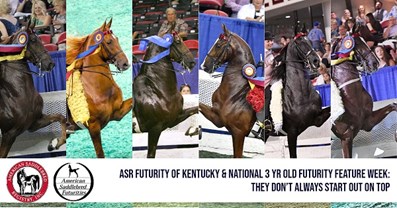 I’ve had the privilege of being in this industry since I was a child, starting in Danville, Kentucky, with the likes of Garland Bradshaw, Bill Wise, and Dick Boettcher. Through the years I’ve paid attention to those and a number of other top horsemen and most all have talked about giving horses a chance to grow and develop, that like people, they don’t all mature at the same time and are not all superstars right away. It has been said over and over that owners and trainers have to have the patience to let these horses mature at their own pace and certainly give them a chance with the leather on, especially if they are from a family of show horses. We’ve also seen time and time again that several horses whose picture would not be used in the ASHA handbook as the ideal American Saddlebred have turned out to be longtime stars of the show ring.

Looking back through the Futurity records this week, that wisdom was abundantly clear. You could fill a phone book (if they still made them) with the horses that were third through eighth in Futurity events that became consistent winners at the highest level as aged horses. We’re going to take a look at six of them that made the above statements come true.

CH Walterway’s Remember Me. Connie Jessee is on record as the breeder of Walterway’s Remember Me who was raised by Larry Hartsock and in turn sold him to Ceil and Kenny Wheeler as a weanling. Remember Me is by Star Material who was a reserve world’s champion in the Futurity of Kentucky Weanling division in 1987. His dam is the Broodmare Hall of Fame producer, Yorktown’s Forget-Me-Not. While he was reserve in the Weanling Futurity and won the Amateur Weanling Futurity, Remember Me was a sixth place finisher in the Kentucky Futurity Yearling event and then third in the National Three-Year-Old Five-Gaited Futurity with Peter Cowart. 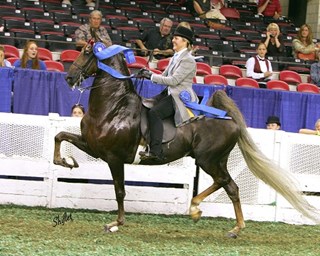 Remember CH His Supreme Reflection? Bred by Sandra Corney, the son of another Futurity graduate, Supreme Heir, and out of Beat The Odds who was by world’s champion Attaché, His Supreme Reflection started his illustrious career as the fourth place finisher in the New York Yearling Futurity with Michael Chase and was later third in the 2005 National Three-Year-Old Fine Harness Futurity with Lynda Freseth. 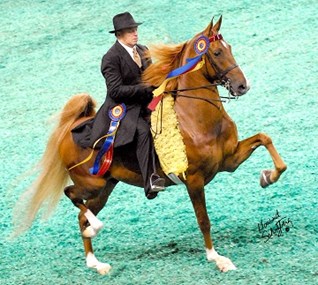 Wade Fairey was the breeder of CH It’s Aerosmith who was sired by VHF The Licorice Drop Kid out of the Sultan’s Great Day daughter, Steal The Day. A fourth place finish in the 2013 Kentucky Futurity Two-Year-Old Fine Harness event with Lionel Ferreira set them up for a third place finish in the National Three-Year-Old Park Futurity the following year. Just a year later the athletic, black gelding appeared in the junior exhibitor park division with Skylar Rueff and that’s where it all took off. They were world’s champions in the qualifier and reserve world’s champion of champions in the second class, repeating those placings in 2016. 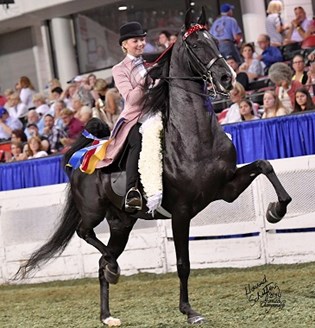 Graduating to the amateur division in ’17, they swept the division at Louisville, earning Aerosmith his first world’s champion of champions blanket of roses. Two years ago, the Reagan family became the owners of CH It’s Aerosmith and at the 2019 World’s Championship Horse Show under the direction of Steve and Tiffany Wheeler, Reagan Campbell and the sensational gelding finished as Junior Exhibitor Three-Gaited Park World’s Champion of Champions and division one world’s champions. 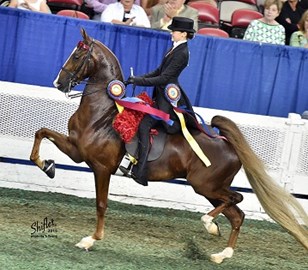 At the season’s end, the David Rudder family became the new owner and the 2015 season with Alex Rudder was most impressive, including World’s Champion of Champions Junior Exhibitor Three-Gaited 14-17 and World’s Champion Junior Exhibitor Three-Gaited 14-17 Sec. I honors, which were followed by the Junior Exhibitor Three-Gaited 14-17 National Championship and qualifier. In ’16 they were once again world’s champions in section two of the qualifier and came back as reserve world’s champion of champions, while repeating their National Championship wins. In 2017, the Chris and Stephanie Brannan trained team once again swept the 14-17 honors at Louisville. In 2020, this multi-titled world’s champion of champions has a new jockey, Boone’s Farm’s Anna Grace Whitworth.

CH Moonlight Memories started out much like Curious George, taking fourth in the National Three-Year-Old Five-Gaited Futurity with Virgil Helm who started her for breeder Roberta Rassieur. She is sired by Rassieur’s multi-titled World’s Champion Five-Gaited Stallion Desert’s Supreme Memories out of the Phi Slama Jama daughter, Tanbark’s Enchanted Evening (BHF). Phi Slama Jama had been a winner in the Texas Futurity.

CH Moonlight Memories went from fourth at Louisville as a three-year-old to winning the Junior Five-Gaited Mare World’s Championship with Helm showing for new owners, the Allen Bosworth family. The Bosworth’s trainers, Evan and Mary Orr took over after Louisville and that magical ride continues today. It started with McGee Bosworth and the beautiful mare sweeping the 2014 junior exhibitor 14-17 division, earning the mare’s first world’s champion of champions title and her first national championship later that fall.

In 2018, they made the move to the gaited pleasure division where they remain superstars. They were reserve world’s champion of champions that year and in ’19 put it all out there again for World’s Champion of Champions Adult Five-Gaited Pleasure and World’s Champion Adult Five-Gaited Pleasure Sec. I honors to go with yet another UPHA/American Royal National Championship sweep.

Our final featured star that did not start on top is Eeta Sachon. Bred by Joan Lurie, this daughter of Undulata’s Nutcracker and Glory Heirabella (by Supreme Heir) began her career with a seventh place finish in the Kentucky Futurity Yearling division. With Darrell Case again showing, she moved up to third in the Kentucky Futurity Two-Year-Old Fine Harness division and was again seventh the following year in the National Three-Year-Old Five-Gaited Futurity. 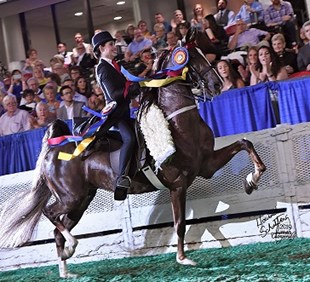 Again, this is just a small sampling of the success stories, which have come out of the Futurity program from those who did not start out on top. We hope you’ve enjoyed Futurity week and will contact Lisa Duncan at the Registry with any questions on how you can become a part of this all-to-important program for the American Saddlebred breeder.