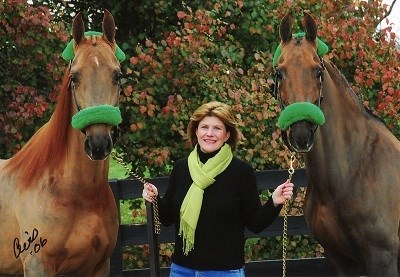 Amy Dix Rock can be described in two words: driven and passionate. She has dedicated her time to the betterment of all the things she loves, and this extends to her passion for the American Saddlebred.

“I’ve been involved at all levels -- owner, competition, breeder -- and I just love everything about the breed,” Rock said.

Rock is a Kentucky native, and after several years of moving around the U.S., she moved back to her home state two years ago. She is a part of the Honorary Board of Directors for the American Saddlebred Horse Association.

Rock said: “When we moved back home to Kentucky, I knew I wanted to get more involved, more hands on with supporting the breed.”

In addition to her position at ASHA, Rock has a long history with the breed and has had success as both an exhibitor and breeder. Her journey with the Saddlebred began in 1983 when she was given riding lessons as a birthday present from her parents.

From there, Rock owned her first Saddlebred at age 16, “Santana’s Honey,” and showed her beloved on the county fair circuit for many years. In recent years, Rock has started a successful breeding program.

“I’m really proud of the breeding we are doing right now. I think it’s incredibly important to help perpetuate the breed. I've been able to breed successful show horses that give great joy to so many people. That makes me really proud,” she said

Rock cited the horse “My Front Page Lady” as the foundation of her breeding program. The Saddlebred was a very successful horse, winning the World’s Champion of Champions title six times. She said she was lucky to have great mentors to help her and give her guidance on the “joys and frustrations” of breeding.

Rock said: “We’ve done it on a very small scale. It was always something I was interested in. I’m a scientist by training so I like the science and the genetics and everything  associated with it to the veterinary and genetic perspective.”

Rock is more than an accomplished American Saddlebred breeder. She is also a trained immunologist and earned her doctorate from the University of Kentucky. Additionally, she earned her master’s in business at Vanderbilt. She said these two degrees have helped her get into working with small pharmaceutical and biotech companies.

“Recently I am working for a biotech company in California,” Rock said. “They are trying to create vaccines and treatments utilizing the immune system to fight infectious diseases, including the pandemic that is going on right now. It’s a really cool job.”

Rock brings her business sense into the ASHA Honorary Board of Directors. In her position at ASHA, she has helped lead strategic initiatives and helped committees set goals and objectives. Rock wants to create different ways to help the organization tackle projects that it wants to do to support the breed.

She said she wants to help diminish stress and strengthen communication within ASHA and its committees to allow them to be successful in all their projects.

“I listened to the board members when saying things that they thought were going well and things that they didn't think were challenges and figured out that a lot of it came down to communication,” Rock said. “I thought ‘How do we make communication easier and better?’ I'm putting a plan down on paper and throwing out thoughts and trying to be receptive to suggestions and helpful comments and criticisms.”

Rock remains committed to helping better the horse breed she loves. She also wants to continue to contribute to ASHA to help it become a place that will uplift the American Saddlebred.

“I love the American Saddlebred. These great animals deserve our respect and protection. The industry has many interests - trainers, breeders, amateurs - with different perspectives - career, hobby, and welfare. It's ASHA's job to serve the industry with all of the interests and perspectives. I think it’s important for all of us to support ASHA and its mission,” Rock said.