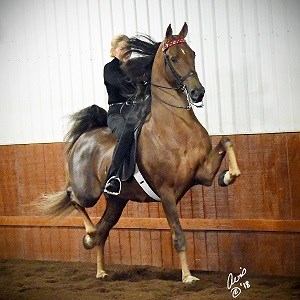 Rachel Seifert did not grow up on the back of an American Saddlebred, but once she fell in love, she has become committed to the breed -- heart and soul. She has seen many of her #asbdreams come true, but still has goals she wants to reach.

Seifert serves as a member of the honorary board for ASHA and has worked on committees and task forces over the past several years, including Code of Conduct, bylaws, and COVID-19 response.  Seifert said one of her goals for the organization and for the breed is to help improve outcomes for rescue horses. She said she wants the processes to be easier to allow those horses to be recognized as Saddlebreds, with their rescuers holding ownership rights.  “Those of us who are breeders and owners know that horses go through cycles in their lives and not every individual will compete at the highest levels. We all want them to go on to other “jobs” so that they are useful and well-loved.”  “Beyond that specific interest, I want help the organization with problem solving and working through other improvement efforts,” Seifert said.

Although she began showing Morgans at the age of 9, Seifert said her equestrian aspirations changed in her late 20s. While at a horse show with a friend, she saw a very competitive amateur five-gaited class and thought to herself, “wow, that’s the kind of horse I want to be showing!”

After earning her undergraduate degree in animal science at the University of Maryland in 1981, she began work on a Thoroughbred breeding farm. Seifert said she quickly became aware that a life being dragged around by yearlings was not for her . . . four years later, with a law degree in hand, Seifert joined one of the largest law firms in Dallas, Texas as an associate in the real estate department.  That assignment led to working with several of the firm’s hospital and health care clients, assisting with corporate restructurings.  In 1992, she left private practice to work in-house at what soon became the largest hospital company in the country.  After a series of promotions, she then joined Community Health Systems, Inc., in Tennessee, where she served for 19 years as the company’s general counsel and corporate secretary.  Upon retiring in 2017, she relocated to Kentucky to pursue her horse business goals on a full-time basis.

Seifert has enjoyed success showing five-gaited Saddlebreds on the various circuits where her legal career pursuits took her. In the 1990s she campaigned Attache’s Big Business, Champagne’s Ambassador, and Worth A Fortune.  In the first decade of the new millennium, Callaway’s Holy Moly earned her first ribbons in five-gaited competition at the Kentucky State Fair, followed by Freshly Dipped.  She said her long-time goal of winning a World’s Championship on a five-gaited horse was finally achieved in 2018 with HS I’m A Dreamer.  “After 20 years of showing at the Kentucky State Fair and at the age of 59, I finally made it to the winner’s circle -- it was just as sweet as I’d always dreamed it could be!”

Seifert is currently showing 4-year old King Midas in five gaited show pleasure and looking forward to showing Counting Cards in the 2021 show season.  Although these recent accomplishments have been achieved under the Visser Stables’ banner, Seifert says each and every trainer and instructor along the way can rightfully claim a piece of the credit in making her #asbdreams come true.

If asked for her advice on those looking to make a living within the Saddlebred community, Seifert suggests being sure to have a business plan and a solid understanding of both the fixed and variable expenses, as well as the revenue needed to break-even.  One also must have a solid understanding of the regional market (existing competitive market vs. Saddlebred/saddle seat start-up) and the need to be flexible and creative in attracting new clients.  Above all, Seifert notes it is critical to foster a love of horses in young people and to continue to fuel their passion for horses and riding or showing them.

“As the decades and generations have passed when it was commonplace for a relative to have a connection with riding or showing, it is more likely a novel interest that has to be cultivated,” Seifert said.  “The love of horses is still in our collective genetic code, but to see the “horse gene” expressed, there has to be exposure to the experience and a pathway to compete at the appropriate level (both skill and financial) for the individual. It’s up to us to make sure that “showing horses” is right up there with youth soccer, soft/baseball, gymnastics, any the myriad of other athletic choices available to children and parents in the 21st century.”

Creating a lifelong connection to the equestrian life and commitment to the American Saddlebred.

ASHA is working with Katelyn Norris, a talented writing intern and Journalism student from Bellarmine University, to spotlight volunteers dedicated their time and efforts to ASHA, our members and the American Saddlebred community. We look forward to sharing more of our leader’s Saddlebred Stories!