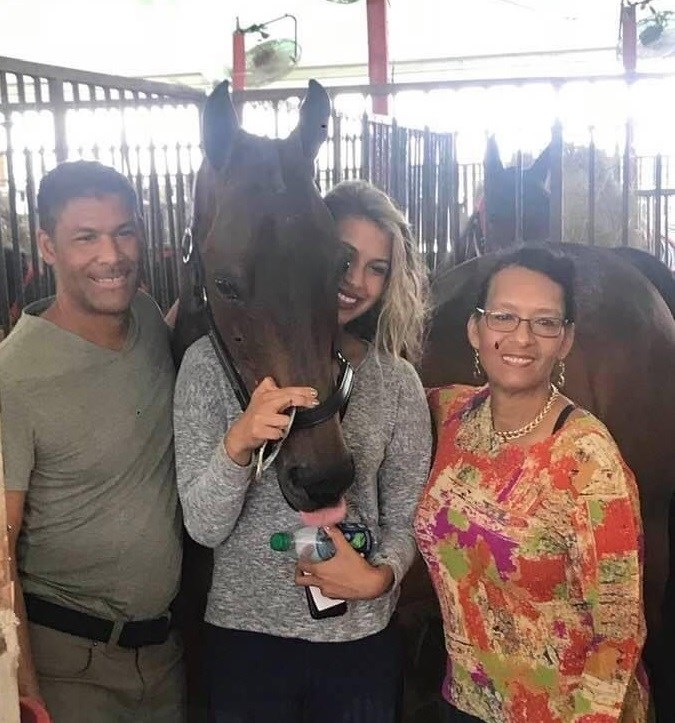 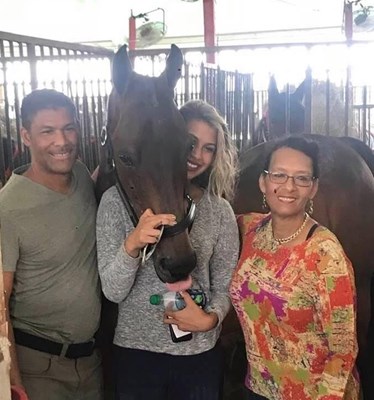 The horse-crazy kid turned lesson student who starts dreaming about competing, having a horse of their own, and chasing their equestrian dreams is a common origin story for most of us that have fallen in love with the American Saddlebred. Then for every horse-crazy kid that navigates their way into becoming an equestrian, there is a team full of family, cheerleaders, and friends that also find themselves now immersed in the horse world and connected to our #asbdreams. Kristen Eve and Sharon Gardner are one of these teams, one horse-crazy kid turned accomplished equestrian and mother who through the love for her daughter and special connection to one horse have both become lifelong lovers of the American Saddlebred. 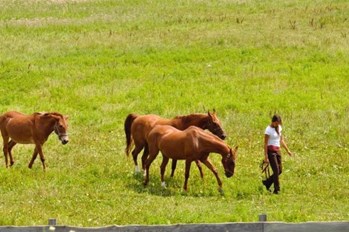 The Gardner family makes their home base in Oak Brooke, Illinois. While Kristen is now a career woman making a name for herself living in New York City, she grew up a Midwestern kid obsessed with horses from her first exposure to “Black Beauty” at the age of two. Starting lessons at three at a family friend’s barn too far away for Kristen’s liking, and they started the search for a weekly lesson program nearby. Fortunately, Sharon found MBA Equestrians and the American Saddlebred. When Kristen reflects on the start of her Saddlebred Story she shares, “discovering Saddlebreds was far from intentional, but now I can’t imagine life without their influence.”

From that first lesson, the Gardner family involvement in the industry continued to grow; by 2002, they had their first American Saddlebred. Undulata’s Macarena, known to many as the Western Country Pleasure World’s Champion of Champions CH Toreador, was Kristen’s first horse and the tipping point of the whole family getting more involved. Kristen’s skills grew under the guidance of Landmark Farm and Kristen has an impressive resume of wins from across the country in equitation and performance with horses such as Callaway’s Gold Reserve, CH Kalarama’s Carrousel, Callaway’s Law And Order, and more. Sharon was the consummate supportive Show Mom who loved her daughter, appreciated the horses that fulfilled Kristen’s passion, and was involved volunteering on a variety of Saddlebred boards in the region, until 2011 when CH Kalarama’s Carrousel became “her horse”.

We have all heard all it takes is one horse, well for this family there hasn’t been just one horse, but there was only one horse in their life that could take this horse show mom from the sidelines to the show ring. Kristen and Sharon have dedicated their lives to the American Saddlebred and our community each in their own way. We are thrilled to have the opportunity to share more of their incredible Saddlebred Story and the impact the horse has had on their life. Read their responses in our Saddlebred Story Spotlight Q & A below. 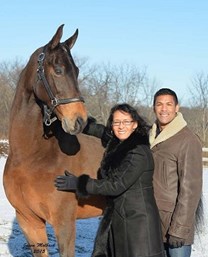 Favorite memory with the American Saddlebred?

My favorite memory with American Saddlebreds happens to be a family memory!  When we were searching for a young equitation prospect, everyone lied and told me that we weren’t able to purchase the one I had my heart set on, Kalarama’s Carrousel.  Soon after, on Valentine’s Day, he came trotting into the ring with a huge red heart around his neck.  Very clever of my dad to set the bar so high for a Valentine’s present.  He’s still around and is practically my sibling at this point.

Every experience, learning moment, and achievement with Kalarama’s Carrousel. From learning the basics of being around horses, being her lesson horse to teach her how to drive, going into the ring for the first time, and all the other moments in between that he decided to take care of his “Mom” as a special memory for her. 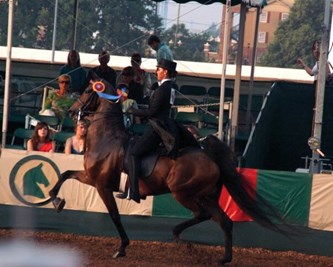 Proudest accomplishment with the American Saddlebred?

There are a few that I really can’t choose between. The most obvious is winning the UPHA Pleasure Challenge Cup with my heart horse Callaway’s Gold Reserve.  As a rider, however, I’m most proud of the classes in which my horses really showed up, and I rode the horse I was on that day, not the one I had practiced for.  Those unexpected rides when everyone rises to the occasion are such a special thrill.

Sharon’s proudest accomplishment for their family outside of Kristen’s victory in the UPHA Pleasure Challenge Cup is all about the unexpected becoming reality. It was when Kristen was showing Kalarama’s Carrousel at Lexington Junior League for the first time in Junior Exhibitor Three-Gaited. They went as a family to Lexington for the whole week in anticipation of this big debut. They went in with simple goals that they felt were huge expectations for “Bodie”. They just wanted to get into the ring, make it past the big video screen and allow Kristen to make it through the class. Much to their surprise and an absolute thrill was when they won unanimously out of 13 entries in both of their classes that week. To make it through the class as a new team with a young horse would have been a win for them, but to come out the actual winners and get applause from the likes of Merrill Murray during the victory pass will forever be an unforgettable moment in their Saddlebred Story.

Also very special is achieving Kalarama’s Carrousel Champion Status. It is special to Sharon because both Kristen and she competed with Bodie to help him achieve this honor. 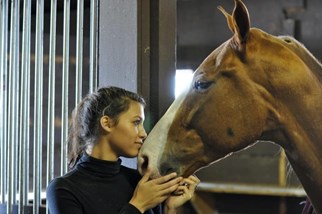 What is one piece of advice you have for enjoying the American Saddlebred?

Surround yourself with people who believe in you – period, but particularly in this sport.  They’re out there! Trust me!

As a rider, it’s your job to believe in your horse. When you make them feel safe and supported, they are able to blossom.  The same applies to your relationship with your trainer and barn family.  The time I spent riding with a trainer who believed in me more than I believed in myself was priceless.  Shout out Jonelle Chovanec!

If you feel like your passion for the horses is fading, take a step back and consider who and what else is around you.  Riding is a humongous commitment, but I promise, the horses are more than worth it.  Don’t ever let anyone take that from you.

People need to learn to appreciate the intelligence, strength, athleticism, kindness, and grace of all horses and for the American Saddlebred the beauty and the majesty of the breed. Remember that the horse is permitting us to partner with them and it is through that that we are allowed to have the thrill of the ride and/or drive. Never take the horse out of the equation if you only focus on the ribbons and winning that will fade. To truly enjoy the experience you have to live it with the horse. Understand that us being able to be with these animals is a privilege and a blessing. I am always in awe that these animals allow us to do the things that we do with them. 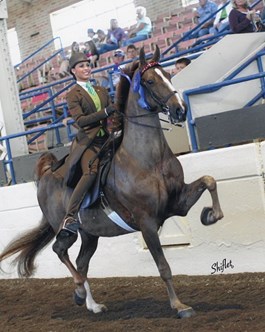 How has the American Saddlebred influenced your life?

The American Saddlebred and my time in the industry have taught me by far more than any other experience in my life.  It taught me that you’re never too young to be someone’s role model.  It taught me that hard work doesn’t always pay off -- at least not the way you thought it should.  It also taught me that those times can end up being some of your fondest memories.

As a Black woman who has lived almost entirely in academic and/or urban environments, my riding career has had a really significant impact on my perspective.  My racial ambiguity has provided me with the unique experience of largely blending into multiple vastly different “worlds,” but never quite escaping reminders that I don’t completely “belong”.  That’s a conversation I would love to have, but space is limited today!

I am extremely privileged– hard stop.  I consider the immersion in a culture very different from my own that I gained as a junior exhibitor to rank high among those privileges.  I now do work that I absolutely love for a youth mental health non-profit.  In this role, much of my time is dedicated to expanding access to mental health services in rural communities.  My strong connection to Saddlebred community makes me value this aspect of my work that much more.  It’s somewhat of a joining of my worlds.

Above all, while I struggle with the feeling of belonging, I’m always at home on a horse.  Words cannot express how much that means to me.

Discovering them as an adult and only getting directly involved with one American Saddlebred Sharon doesn’t feel that the breed has necessarily influenced her life, but Bodie has most definitely brought them into her life in a way she never imagined when Kristen started this passion. Bodie’s role in her life changed drastically when Kristen went off to college. A horse she originally never felt very comfortable around in the stall, when it felt like she needed to give him more attention with her daughter now absent the quirky bay gelding became the rock Sharon needed. During a time when Sharon was facing personal concerns the more time she started spending with Bodie, the more he softened and became her shoulder to cry on, quiet confidant, and calming presence. Sharon describes it as, “I would look into his soft, all=-knowing eyes and know that he understood that I needed something from him: power and strength. It sounds crazy, but this horse knew. I have learned that God gives you exactly what you need when you need it. I was given a horse that would keep my inner thoughts and, in his own way, communicate back that it would all be fine.”

It was this role that Bodie took on in Sharon’s life in 2011 that led her to learn how to drive, become an active exhibitor, and take on a new role in the American Saddlebred community. 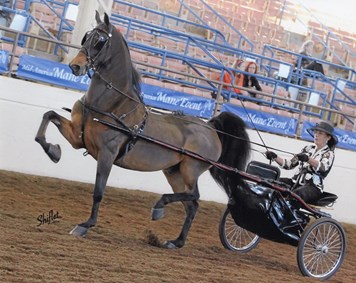