We are saddened to share and join the horse world in mourning the passing of Kenny Wheeler Sr. of Cismont Manor Farm. Horseman, rider, trainer, judge, breeder, mentor, a benefactor—Mr. Wheeler's contributions to the sport were monumental across the Hunter/Jumper and Saddlebred industry. We send our sincere condolences to the Wheeler family and friends.
Learn more about the impacts of Mr. Wheeler on the equestrian world in this feature from Chronicle of the Horse "Simply Put Kenny Wheeler Knew a Good Horse" 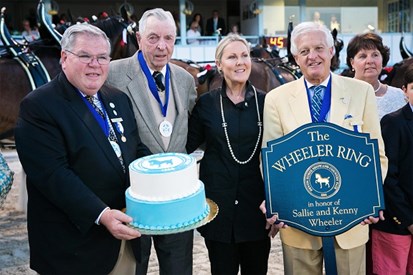 Kenneth Mason Wheeler Sr., lifelong equestrian and family man died peacefully in his home at Cismont Manor in Keswick, Virginia, on Wednesday, March 3, 2021. He was 92. His life revolved around his family and horses, his two greatest loves.

Born on May 31, 1928, in Charlottesville, Virginia, to parents Mr. and Mrs. Roy Wheeler, Kenneth grew up just a few miles down the road from what would become Cismont Manor. His passion for horses started as a young boy riding ponies at the Reeves family farm, Edgewood, where his father was the farm manager. Kenneth had a handsome dappled grey pony, Owen Glendower, that he not only rode to the local store but also had great success from the local shows all the way to Madison Square Garden. Following his graduation from McIntire High School in Charlottesville at the age of 15, Kenneth launched his career as a professional rider and trainer in the hunter world.

Kenneth served his country in the United States Army during the Korean War, and as luck would have it, he was able to do it stateside. His first professional job was for noted owner W. Hagyard Perry. After a few years, he signed up to work for Mary Barben at Keswick Stables. During his time at Keswick Stables he rode for many different owners to much success. Upon Mrs. Barben's retirement, Kenneth went on to train for legendary owner and rider Peggy Augustus. There he trained such great horses as Waiting Home and Little Sailor.

After that, Kenneth went into business with his late wife, Sallie, owning and operating his own public training stable, Cismont Manor. Over the almost 60 years in business, Kenneth set the standard for hunters. His champion horses are countless including Ruxton, Two For One and Weather Permitting, among many others. However, his most famous horse was Isgilde. She was champion five times at the prestigious Devon Horse Show and all the major shows from Madison Square Garden to Delmar, California. Isgilde was the only horse that Kenneth would never sell and is buried in the front yard of his beloved Cismont Manor Farm.

When Kenneth wasn't training horses, he could be found playing cards, golfing, or rabbit hunting with his family and friends. A true southern gentleman, he will be remembered for his patience, dignity and kind words.

Kenneth was a great horseman, great friend and a loving father and grandfather. His love for people and love for life continued throughout his 92 years. His legacy will live on through the people and horses he touched.

A celebration of life for all of his family and friends is being planned for later in the year.

In lieu of flowers please consider a donation to Virginia Horse Center Foundation http://vahorsecenter.org/support-vhcf/. or the charity of your choice.

Condolences may be shared with the family at www.HillandWood.com.