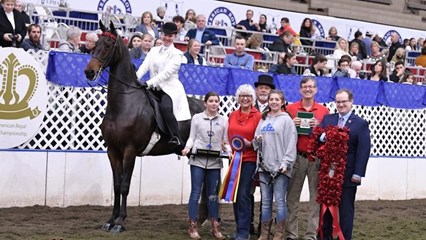 On this Veterans Day, we celebrate the commitment of the courageous servicemen and women of this nation’s military, but also the military heritage of our breed. Historically referred to as the “Horse America Made,” the American Saddlebred has a long and proud history that can trace its roots to the birth of our nation and its forefathers in the United States military.

The breed started as the “Kentucky Saddler” and earned them acclaim as a breed by their tremendous service in the military. In peacetime, the high demand for Saddle Horses enabled the industry to recover quickly. As the war ended, horse owners began to enter their Saddle Horses into the show ring, where they became stars because of their beauty, style, and utility.

As their days as a cavalry horse are long over, the American Saddlebred and the community that loves them have found a way to continue to be an alley to the servicemen and women and their families. From a desire to celebrate the breed, our National Championships, and Veterans Day, the “Veteran” Horse Class was born! Kristin Laufer of Overland Park, Kansas, has been instrumental in the creation and promotion of this class. Laufer shared that because the UPHA American Royal always falls on or around Veterans Day, the American Royal horse show committee wanted a way to honor our country’s servicemen and women during the week of the show. The Veteran Horse class is only for American Saddlebreds 11 years or older to also honor Veterans Day. 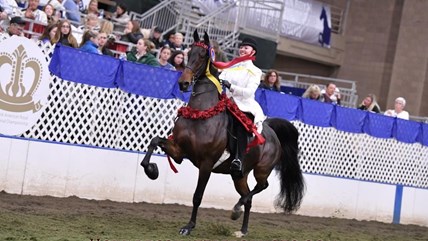 The 2021 UPHA National Championship American Royal once again be hosted the Folds of Honor Veteran Three-Gaited Show Pleasure division. Once again a strong group of seasoned champions took to the ring to support the program. The qualifying class champion title was taken home by CH Spread The Word and Sandra Gallagher and last night's championship saw CH Graceful Surprise and Amanda Murchison in the winner's circle. 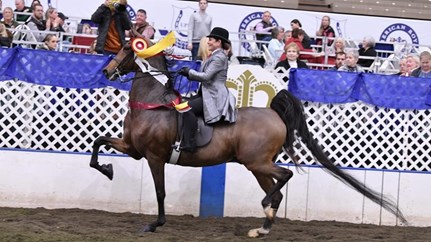 The Veteran Horse series began in 2018 with classes at Bridlespur Horse Show, Chapter V Horse Show, St. Louis National Charity Horse Show, and the UPHA National Championship American Royal. This class enables donations to be made to Folds of Honor, as well; the winner of the class will receive a custom trophy.

In addition to the Folds Of Honor division in the Midwest, honoring Gold Star Families had a very special place during the North Carolina State Championship Horse Show. US Congressional Medal of Honor recipient Corporal Hershel Woody Williams served in the US Marine Corps, Marine Corps Reserve, and worked with the Department of Veteran Affairs.  A joint effort between attending barns and the Hershel Woody Williams Medal of Honor Foundation Gold Star Families Memorial Monument project connected a Gold Star Family and a show horse that would compete in honor of that fallen veteran. You can watch a sample of the special program at the 2020 North Carolina State Championship Horse Show showcasing American Saddlebreds for American Heroes

The American Saddlebred Horse & Breeders Association (ASHBA) is thankful to Military Veterans today and every day for their dedication and sacrifices. We are proud of the connection of the American Saddlebred horse to servicemen and women of the United States of the past, present, and future.