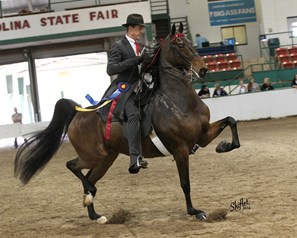 As part of the 40th Anniversary of the UPHA 14 Spring Premiere Horse Show, officials have brought back the iconic Symphony of Horses. The show will run April 19-23 at the Eastern States Exposition, W. Springfield, Massachusetts, with the Symphony being held Friday night, April 22.

An impressive group of American Saddlebreds will be performing to the sounds of the 35-piece Best of Boston Orchestra and guest star, Broadway’s and Disney’s Josh Strickland. Headlining the group will be the 2021 World’s Champion Five-Gaited Stallion, Epoque Kiss NKF. Burt Honaker will be presenting the homebred son of Callaway’s Northern Kiss and world’s champion VHF Belle Epoque.

Also in the lineup will be 2021 Reserve World’s Champion of Champions Junior Fine Harness titleholder Dheir To Tango. Phil Fountain will be on the lines for Robin Rednor Veghte’s Mendonhall. David Cater will be aboard the multi-titled world’s champion of champions CH Graceful Surprise, representing owner Debra St. Laurent. A world’s champion of champions in harness and under saddle, the grand mare CH Futurette will be ridden by Natalie Martens for George Liberty’s Juniper Farms.

Luman Wadhams Stables will present a duo of hard-riding young ladies on their five-gaited American Saddlebreds. Ellie Riva will be aboard current reserve world’s champion Dreamacres Inferno. Undefeated in 2021, He’s A Free Spirit will rack like the wind with Alexandra Dionne.

Coming from Pennsylvania, Wentz Stables will be presenting a trio of champions, including the fine harness sensation Absolutely Amazing who will be driven by Tara Wentz-Goosley for Glenn Moyer; Our Belleman, the 2021 Lexington Junior League Junior Exhibitor Three-Gaited Show Pleasure 14-17 Reserve Grand Champion owned and ridden by Patrick McMurtrie; and former Western Country Pleasure World’s Champion of Champions CH Winsdown Edgecliff who will be presented by Val Nuno for Lynn Finelli and Jim Horton.

It will be a family affair in the ring for the Garone’s Fairfield South as Gary Garone will be driving the multi-titled Heirial Heir for Carolyn Virtue; daughter Devon Garone will be on Rick Daigle’s three-gaited star Full Coverage; and son-in-law Kyle Gagnon will be atop the world’s titled Undulata’s Secret Rendezvous, also for Rick Daigle.

Last but certainly not least, the versatility of the American Saddlebred will be on display when Ava Perry and Nancy Reed share the ring with their beloved entries. From Verrill Stables, Perry will be showcasing her equitation skills with Ed’s Perfect Gift, while High Tail Acres’ Nancy Reed will be driving the many times fine harness champion Undulata’s Legends Of The Fall.

“Never before has such an impressive line-up of champions been put together for a Symphony event,” said chairman Bob Funkhouser. “We at Chapter 14 are extremely grateful to the owners and trainers of these stars for participating and allowing us to showcase the American Saddlebred to thousands. They will be sharing the program with equally impressive stars from the Morgan, Hackney, Standardbred, and Friesian breeds. We invite everyone to W. Springfield to see this one-of-a-kind show in person but if you can’t make it there will be a pay-for-view livestream offered for the first time.”

Tickets are available at https://ticketing.thebige.com/Admissions/Default.aspx?GroupPromoCode=UPHA or for more information contact Bob Funkhouser at funkhouser@saddlehorsereport.com.