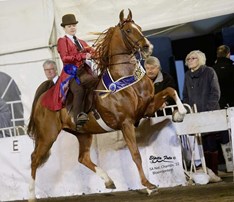 To keep the judging objective, four US Judges were selected to judge this prestigious show, including Ellen Beard. "I had the unique honor to officiate the championships along with Sandra Currier, Michael Tunstall and Kristin Stivers,” Ellen said. “The South African Saddlebred is hearty, game and beautiful. The top tier horses would challenge the American Saddlebred in their competitive endeavors. Our panel was met with genuine hospitality and appreciation."

One stallion excelled at the show and made history in two divisions. Undulata’s Made In Heaven was entered in the Amateur Fine Harness Division with his owner, Ross Millin, in their debut show in harness. They won this division in style on Tuesday and a decision was made to try to win another Grand Championship in the Three Gaited Division with the 14-year-old breeding stallion. He is by Undulata’s Nutcracker out of Believe In Love, bred by Joan Lurie of Willowbank Farm. He was trimmed half-an-hour before the Three Gaited qualifying class on Thursday and won.

On Stake Night, he unanimously won the Three Gaited Grand Championship with Junior Hugo in a 14 horse Grand Championship for the fourth time! It was decided to retire him and Ross and his stallion walked out of the arena for the last time. By winning two divisions (Fine Harness and Three Gaited) at the same show, “Heaven,” Newline Stud, and Tears & Roses Stables made history. He became even more of a legend! His foals also excelled at the show for many owners. One of his gelding sons, The Emperor’s Son, shown and trained by owner Suretha Maasdorp, was Reserve Three Gaited Grand Champion.

The Fine Harness Grand Championship was won for the fifth consecutive year by one of the greatest Fine Harness Champions of our time, Ultimate Joe and owner Gert Koch (trained by Charlie Brown).

The Five Gaited Grand Championship was won after a workout by the crowd’s favorite gelding, War Sports and Carol Badenhorst (trained by Charl Oosthuysen Stables).

When one analyses the breeding of all the winners, it was Undulata’s Nutcracker that dominated as the sire or grandsire of many SA Champions, Grand Champions and Reserve Grand Champions.