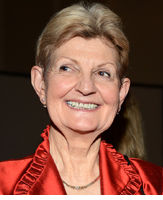 When Joan Lurie and her partners opened their American Saddlebred training facility in 1981, little did they know that 30 plus years later Willowbank would be one of the top stallion stations in the country. And they probably would not have predicted that the main focus of the farm would grow to be breeding, training, showing and selling young stock.

It was Joan who made the decision that in time changed her career and the future of the farm. In 1982 she and a partner purchased Attache, a three-time World's Champion and World's Champion's sire.

Now Willowbank stands eleven premier American Saddlebred stallions. They breed dozens of mares and they foal more than 40 babies a year, many going on to win World's Champion honors for their owners. Further reflections of Willowbank's continuing success was the 1997 move from Shelbyville, Kentucky to 132 rolling acres on Todd's Point Road in Simpsonville, Kentucky.

Joan and her partners, Jim and Bonnie Ruwoldt and their daughter, Kathy, created the new Willowbank with a 40-stall main training barn and adjacent breeding shed. There is a broodmare/foaling barn with runouts and stalls for 20 mares and foals, two more mare and colt barns, plus beautiful ponds and lush pastures bordered by miles of black board fence.

In 1998 Joan Lurie was presented the prestigious ASHA Breeder's Hall Of Fame Award, and in 2016 Willow Bank Farm earned the ASHA Breeder Of The Year Award.

In 1999 at the Kentucky State Fair, Willowbank youngsters were three for three, winning both the KY Yearling and Weanling Futurities and the Weanling Breeder's Stake, an unprecedented feat. They have also won numerous blues and high ribbons since then.

Email your question to Joan Lurie