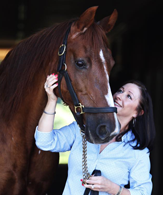 Donna Finch was introduced to the American Saddlebred world when she took her first Saddle Seat riding lesson with Mary Orr in August 2005. There was an instant love and bond formed between these magnificent horses, Mary and her husband Evan Orr, and Donna and her husband Jack Finch. In February of 2006 Donna purchased her first American Saddlebred show horse, WCC CHRiva Diva. Affectionately known as Riva, this very special mare won Donna's heart and opened the door for the Finch family to ultimately own, show and breed many great American Saddlebred horses. One short year after Riva became a member of the Finch family, they purchased their second show horse in February of 2007. This was WGC CHOur Charming Lady, lovingly known as Grace.

Since the purchase of Riva in 2006, Donna has campaigned a string of show horses throughout the Carolinas, Virginia, Kentucky, Illinois and Kansas under the direction of the Orrs and High Caliber Stables. Those show horses have included CHCallaways's Ball of Fire, WCC CHTalkin' To You, WCC CHStonecroft I'm Radiant, WC Shagadelic, and WC Ready to Jet. Her plans for 2017 include showing her new mare Blue Excellence.

While Donna enjoyed and showed her horses, Mary showed Grace for four years.  Under Finch ownership and stewardship, and under training and care by the Orrs, WGC CHOur Charming Lady and Mary won 37 classes out of 38 classes including: 4 World's Champion titles; 2 World's Championship of Champions titles; 2 World's Grand Championship titles; the 2009 Triple Crown; the 2009 ASHA Horse of the Year; and countless awards, honors and recognitions from every professional association affiliated with our breed.

Email your question to Donna Finch