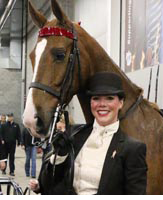 Elizabeth Ghareeb began her riding career at the age of seven when her parents became involved in the breeding and showing of Egyptian Arabian horses.  No Arabian lesson facility existed in the area so she began taking riding lessons with the late John and Anita Cowart along with Madge Bass at Heathermoor farm in the early 1980’s.

Her love of American Saddlebreds was instant, and her show career began soon after, first on the Southeastern circuit and later nationally with Delovely farm.  Ghareeb was a World’s and National Champion Equitation rider during her years with the Shivelys, competing on such renowned partners as CHSultan Commander and CH CH-EQBurning Tree’s Starcrost.

College, and a career with the family Taco Bell franchise, demanded a break from the equestrian pursuits, but horses were never far from her thoughts, and Ghareeb reentered the American Saddlebred community with the purchase of Digger Dan from Debbie Foley.  One horse quickly turned into a string of show horses with Bret and Susi Day at Grey Ridge Farm; a partnership that has produced two World’s Champion Fine Harness mares, WC Tory Burch and WC Amelie.

Now entering her second term serving on the board of the American Saddlebred Museum, Ghareeb puts her marketing background to use chairing the Events committee.  Ghareeb’s purchase of WC Brookhill’s Glam Slam in 2012 provided the perfect opportunity to develop the enterprise into a breeding operation, and in 2015 Ghareeb Equine Investments produced its first foal.  Slamcracker, the first foal out of WC Brookhill’s Glam Slam and by Undulata’s Nutcracker, would go on to be top five in the prestigious All American Cup in the fall of 2015.  GEI LLC had success at the All American Cup again in 2016 with Kiss My Clover, a filly out of Celtic Design and by Tango’s Parting Kiss, who placed fourth in the All American Cup.  Breeding the next generation of show horses has become a focus for Ghareeb, with five foals due in the spring of 2017 out of WC Brookhill’s Glam Slam, WC Tory Burch and Celtic Design.

Email your question to Elizabeth Ghareeb