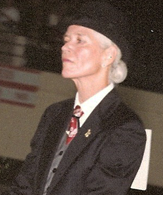 Nancy Leigh Fisher was born in Louisville, KY, just a few miles from the famous Rock Creek Riding Club.  Nancy, however, was raised in Fort Lauderdale, Florida where her riding career started at the age of six under the direction of Estaire Berkeley at the Ft. Lauderdale Riding School.  Nancy's parents were originally from Wausau, Wisconsin where they owned a summer home.  Nancy has always thought of herself as a Wisconsin native and returned here nineteen years ago.

During her teenage years, Nancy spent summers riding in Kentucky under the direction of legendary trainers such as Tom Moore, Jim B. Robertson, Ed Teater and Garlund Bradshaw.  Nancy would work her own horses in the winters and then in late spring move them to these trainers for the show season.