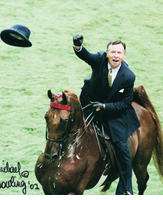 Born in Montreal, Canada, Merrill Murray’s road to the UPHA Hall of Fame started when he went to work for Andy LaSalle in Montreal before Mark Dickey put him with the legendary Marty Mueller at Grape Tree Farm. He stayed on with Mueller when the master horseman went to French Lick, IN. Merrill learned so much about being a horseman from Mueller, especially how to work a gaited horse.

Following eight years with Mueller, Merrill struck out on his own for a little bit before taking the training job at Tom Galbreath’s Castle Hills Farm where he had his first world’s champion, Rebel Yell. World titleholders such as The Godfather, Exciting Evening, Rose Of York and Monti Scott followed. After five years at Castle Hills, Merrill opened his own Merlin Farm in Versailles, KY, and since then the world’s and national champions have consistently flowed in the Saddlebred and roadster divisions.

Five times he has won the World’s Grand Champion Five-Gaited title, the first with CH Our Golden Duchess, then S.S. Genuine, then three consecutive with the wildly popular Courageous Lord.

As Marty taught Merrill, Merrill has shared his knowledge with those who have wanted to become horsemen. Bret Day and Chris Brannan are among those he has tutored. Merrill has also given back by serving as a USEF judge and on committees for UPHA.

A few of Merrill’s most recent stars include Cosmic Charm, Razzle Dazzle Me, Walterway’s Born To Be Wild, Walterway’s What About Me, Roselane’s Dancing For Dollars and The Art Of War.

Email your question to Merrill Murray