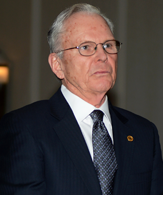 As an aspiring horseman, Nelson Green wanted to work for Tom and Donna Moore but was told he needed to get in better shape. The determined young man went home, did what he needed to do, returned to the Moores and got the job. When they left Illinois he followed them to Kentucky where he furthered his education.

A move to John L. Hutcheson’s Happy Valley Farm, Rossville, GA, proved to be a good one as Nelson developed and maintained one the South’s top training and breeding facilities. Many world’s champion amateur horses were trained and world-class young horses were developed and sold.

Health issues for both Nelson and his partner in life, Josie Forbes caused a change of direction. He eventually ended up back in Kentucky where he hung out his own shingle and again has trained, shown and sold countless world’s and national titleholders. Five times he has won the Fine Harness World’s Grand Championship, twice with CH A Sweet Treat, the other three with CH Radiant Success.

Known to be a meticulous perfectionist in every aspect of his work, Nelson has turned out several top young trainers who spent their time with him. He has also given his time to industry leadership as a renowned judge, serving on the ASHA board, USEF committees and the World’s Championship Horse Show Advisory Board.

Email your question to NelsonGreen