Rocky Mountain Memories #110917 is a 17-year-old American Saddlebred affectionately known as Reggie. He is owned by Julie Kaufman of Blue Willow Farm in Versailles, Kentucky.  Reggie is by world’s grand champion sire and multiple world’s champion Desert's Supreme Memories and out of That Wonderful Girl (a half sister to WCC CHMoonlight Memories, WC Margaret Rose and WC CHThe Evangelist).  Bred by Virgil and Sandra Helm, he debuted in the show ring to a win in the junior five-gaited class at the 2005 Boone County Fair and later had a win in the park pleasure division with Virgil Helm.

Reggie was donated to the riding program at Midway College in 2007 as a western pleasure prospect.

He proved too game for the western division so the college reached out to Julie to see if Blue Willow Farm needed a lesson horse. Reggie arrived at Blue Willow the next day and the rest is history. It seems like every Saddlebred fan in Kentucky knows and loves Reggie! Over his years with Blue Willow, this lesson horse extraordinaire has taught countless lessons, and carried multiple riders on trails as well as into the show ring.  However, his accomplishments don't stop there as his community service and extracurricular activities are numerous. For the past ten years Reggie has given literally hundreds of pony rides at the Lexington Junior League Horse Show’s Family Fun Night. His photograph has been featured in the prestigious Horses USA magazine in an article on summer camps. In 2012, Reggie participated with a group from ASHA in the Horses & Hope Trail Ride fundraiser at the Kentucky Horse Park.

Every year since the inaugural event in 2012, Reggie has served as a petting horse in the UPHA Meet and Greet stall at the Kentucky State Fair World’s Championship Horse Show, giving many young children and families an up close look at the American Saddlebred and the breed’s great personality. In 2015, Reggie appeared in an ASHA commercial while ridden by a teenager and a small child in a double saddle.  This kind gelding also helps out with McKeever's First Ride, an organization whose mission is to showcase the powerful physical and emotional benefits of working with horses. In conjunction with the Orthotic & Prosthetic Activities Foundation (OPAF) Open House at Blue Willow, Reggie gave rides to amputees and veterans.

When Reggie is not busy introducing newcomers to the American Saddlebred through meet and greets and riding lessons, he is in the show ring - competing in a variety of disciplines from hunt seat to equitation to pleasure with riders of all ages. There aren’t enough words to express how much joy the amiable, versatile and multi-talented Reggie has brought to those in our industry as well as to those meeting a Saddlebred for the first time. Reggie is most deserving of his new title, ASR Diplomat of the Breed! 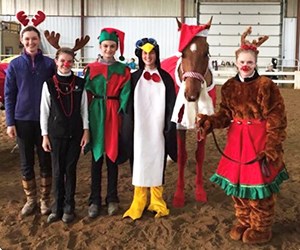 Return to ASR Diplomat of the Breed Main Page